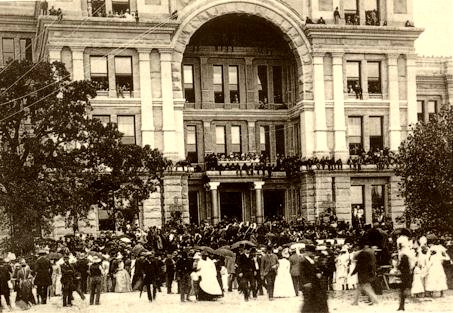 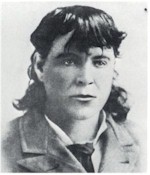 "The greatest of states commissions me to say that she accepts this building, and henceforth it shall be the habitation of her government. When the title to the noblest edifice upon this hemisphere thus passes from the builder to Texas, reason ordains a brief reference to the deeds and times that eventuate in this occasion. Texas has changed the site of her government oftener than any other state in this union, or any nation on this side of the globe. Prior to the transfer to this building the site of government of Texas has been changed eleven times. She (Texas) has a history all her own, wild, romantic, heroic. Minstrels lay never told of deeds more daring than her sons have wrought, nor ever castle hall hath harp or bard hymned praise of purer faith than that her legends bear. Child of storms, the nursling of revolutions, the twilight of her history made her soil the battlefield of freedom, her children the crusaders of liberty. Situated at a remote angle of the gulf, midway between the Aztec empire and the valley of Mississippi, she for a while felt neither that spirit of Spanish conquest which laid in the dust at a blow the throne of Montezuma and the empire of the Incas, nor that gentle spirit of colonization which marked the footsteps of France and Britain upon this continent.

The people of Texas are indebted to United States Senator Charles B. Farwell and his brother John V Farwell, of the firm of John V Farwell & Co., of Chicago and Colonel Abner Taylor, not only for the best statehouse in the United States, but more especially for bringing our public lands into worldwide notice, by agreeing to build the house for the 3,000,000 acres set aside for that purpose. The syndicate, because they have obtained 3,000,000 acres of the best land in Texas, and will in due time cover them with prosperous farmers and increase the wealth of the state by hundreds of millions of dollars, instead of leaving them for the free use of foreign cattle companies whose earnings would not have remained in the state.

Every true and honest Texan must rejoice that the Farwells have found a way to turn our previously useless land into such a state monument as we are this day dedicating, and that they must from self‑interest - if no other motive - cover these lands with farmers, as soon railroads have opened them up. From every point of view, therefore, I say emphatically, as a true friend of Texas, whatever may have been thought by critics, that we have but done better than any of us thought, and the Farwells are justly entitled to our thanks, and this celebration by this vast concourse of our citizens is the best expression of our feeling toward the men who have made it possible. This magnificent building will speak of their skill thousands of years after we have ceased to speak.

In 1852, by the sale of her title to New Mexico, Texas occupied the capitol which was destroyed by fire in 1881. Let us not pass lightly by that old structure. Its halls knew so much of the grief and glory of Texas, so much of her splendor and her sorrow, and so often saw her destinies alternately flit between triumph and ruin. Within the walls of that old capitol, whose buried foundations rest yonder, the government of Texas was administered for twenty‑eight years. Beneath its roof were assembled thirteen legislatures and four constitutional conventions.

Let the fiends who wait upon the lost hiss their hate and shriek their curses in the ear of him who would plot the dismemberment of Texas. Today is an era in our history. The survivors of the early struggles who view this building realize that all which they did was not in vain. Texas stands peerless amid the mighty, and her brow is crowned with bewildering magnificence! This building fires the heart and excites reflection in the minds of all. It stands alone the haughtiest type of modem civilization.

In other lands the hands of man hath reared walls as stately as these and pierced the sky in prouder heights. The architecture of a civilization is its most enduring feature, and by this structure shall Texas transmit herself to posterity, for here science has done her utmost. The quarry has given its and marble, and the mines have yielded their brass and iron, and an empire has been passed as an equivalent for this house. All that enlightenment and art could do has been done. Were I to repress the reflections that occur to me now, I would be untrue to my convictions and to this occasion. It would seem that here glitters a structure that shall stand as a sentinel of eternity, to gaze upon passing ages, and, surviving, shall mourn as each separate star expires. Were we to feel thus, precedent would justify us. Those who built the Pyramids thought the Egyptian empire eternal those who reared the Colosseum boasted that it was a pledge that Rome was everlasting. More solemn lessons are taught at our own doors. Great races have swept o'er this continent like waves o'er the bosom of the deep, and left traces almost as faint.

What is the date, the origin, the fate, of those mysterious civilizations that have vanished forever in the forests of Mexico and Central America, and that flee from the searcher like those illusive lights that flash and fade above the silent tomb? They were our predecessors.

Shall oblivion fling her darkening pall over us? Ah! we are but one of the vast procession of races which it was decreed should pass across this hemisphere. We have no right to say that our own is the first or the last of those civilizations whose impress it was ordained this continent should feel.

More than once the world has lost and resumed civilization. If our civilization possesses the elements of perpetuity it differs from any of its predecessors. If the lessons of the past have not been taught in vain, they tell us that the future holds in hand an hour when the curious antiquarian shall wander through the roofless chambers amid the shattered arches and fallen columns of all their imperial magnificence, and ask when were these walls reared ‑was this edifice, palace or prison, tomb or temple? Does it seem impossible? The destruction of public virtue caused the decline of other civilizations, but does our civilization carry with it the means of its perpetuation? Under certain conditions it may. It possesses characteristics that mark none of its predecessors and particularly can this be said of the state of Texas.

The civilization of Texas, which this proud capitol is one of the voices that shall speak to after ages, is beneficent. The form of our government is a subject of an expressed wish of the people whom it affects. The officers are elected and are the servants, not rulers, of the people. We have no obligatory form of worship, our rights of free speech have no limitation before our laws all men are equal our government is a subject of criticism, not of hideous dread. Our armies and fleets are for the protection, not oppression, of the people. Our institutions enjoin an education of the masses and assume that the government is not the heritage of one man, but the property of the people. Texas says to whomsoever cast his home within her benignant realms, she tenders his offspring an education without money and without price. This education is given to whatever child that abides within her border.

This noble edifice is a fit seat for such a government. It and the features of our civilization are all we can leave our posterity, and even thy of our bequest, we can at least pass from life's stage with the proud reflection that we leave behind us a purer civilization and a nobler edifice than has been bequeathed to us by preceding ages."